DogSeed.com
Home Dog Stories Tail Biting Among Dogs: What It Means And Its Causes
Advertisement 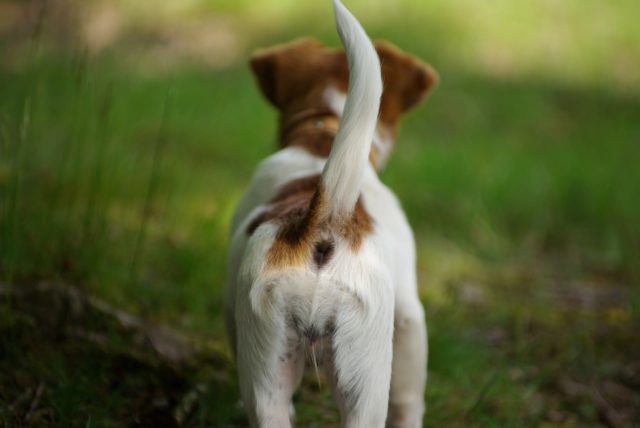 Dogs have a funny behavior that we often mistake for as a clownish act or otherwise something we totally do not understand. Of these silly behaviors, none is probably more perplexing than a dog chasing its own tail in circles.

But while amusing to look at, a dog choosing to bite its own tail may not always be something to find entertainment at. Other times, it could also be a cause of concern by pet owners such as yourself.

Plausible Reasons Why Your Dog Chases Its Own Tail

The thinking of a dog has always been different from us humans. While, to some extent, there is mutual understanding formed between a pet and its loving owner, there is only so much which unlike beings could apprehend from one another.

A dog chasing its own tail is a behavior not fully understood by most people. Although some can easily dismiss this act as simply a dog at play—possibly out of boredom—there could also be other underlying issues why your beloved pet could be eliciting the act.

When your pet is not merely amusing itself out of boredom or confinement, it could also be that your pet is stressed.

In other cases, however, it could also be due to any of the following:

Dogs are especially prone to parasites that latch on their fur and skin like ticks and fleas.

But it is not merely just the presence of these tiny critters that make it typically uncomfortable to dogs. It is actually the saliva that comes with their bites.

Yet, not all dog-parasites are only available at the superficial layer of its skin. There is another kind of parasite that is actually present skin-deep: worms.

A case of skin or environmental allergies

Dog allergies are not just caused by fleas and ticks. Other times, it is also induced by the environment, too, aptly referred to as “environmental allergies.”

Similar to man, a dog’s initial response to allergy is to scratch the area where allergic reaction arose. Therefore, when a dog seems very keen at biting its tail, there is a good chance that it is suffering from a case of skin or environmental allergy.

A dog which appears relentless in scratching itself is bound to cause a hotspot—an area where open wound is formed resulting from too much scratching—which might cause it discomfort and enforce the behavior of biting its own tail as a response.

A dog’s tail is basically a part of its overall skeletal system.

If, in the instance that the tail is injured or fractured, it creates uneasiness to the dog which obliges it to react—typically, by biting it.

10 Breeds of Dogs That Have Energy to Spare Having a dog is healthy. Owning a dog may bring joy to your family and help...